Did you know that the Manufactured Housing Association has a long history?

The manufactured housing association movement in Canada began with the incorporation of the Canadian Manufactured Housing Institute in 1953.

In Atlantic Canada, the Mobile Home, Travel Trailer and Park Association of New Brunswick was formed in early 1970s. In 1981, the Association decided to name our fledgling organization the New Brunswick Manufactured Homes and Parks Association.

Since 2001 the organization has grown exponentially and continues to make a huge difference in the large and productive manufacturing housing industry. The MHAAC assists our members in all four Atlantic Canada provinces.

While the benefits of the amalgamation are many, here are just a few:

We are judged positively by the many accomplishments that we have achieved over the past few years. Here are just a few…

For further information about our key accomplishments, please contact the MHAAC Toll Free at 1.888.341.4663

Become a member of our non-profit organization of industry leaders and become a valued part of our decision-making process.

Have a voice in the direction, promotion and growth of the manufactured housing industry. 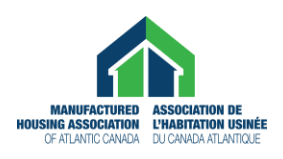